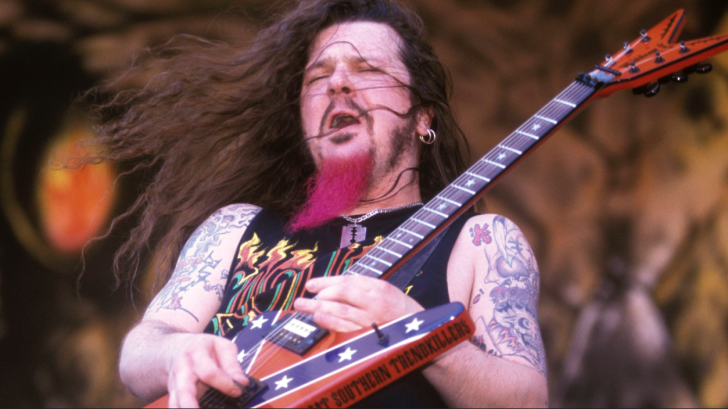 My niche here is generally talking about the lesser known musicians and bands. And yes, anyone that was alive during the 1990s had heard the band Pantera. You likely even recognize the guitar sounds from them being incredibly unique, what you may not know, is

My niche here is generally talking about the lesser known musicians and bands. And yes, anyone that was alive during the 1990s had heard the band Pantera. You likely even recognize the guitar sounds from them being incredibly unique, what you may not know, is who exactly it was belting out those tunes you heard.. and that man was none other than; “Dimebag” Darrell Lance Abbott. And in my humble opinion, hands down one of the greatest guitarists ever to live.

Darrell Lance Abott was born in Texas in 1966. He originally began his foray into music by banging around on his big brother Vinnie Paul’s drum kit. Darrell switched to guitar at age 12 and by the time he was 16 the Abbott brothers had formed a band that would go on to make metal history; Pantera.

It would be years before the Pantera sound we all know would come into existence. They originally began as a glam metal band with lead singer Terry Glaze. Although some memorable solos exist from this time period, I prefer to keep the focus on “Dimebag” from 1990 onward.

The combination of Dimebag’s guitar playing and Phil Anselmo’s vocals was truly powerful. Listen to their back and forth at the end of “Cemetery Gates” from 1990’s Cowboys From Hell.

As the sole guitarist in the group, Dime’s rhythm work is often overshadowed by his incredible solos and wild whammy squeals but it should be noted; Songs like “Walk”, “I’m Broken”, and “Revolution Is My Name” (to name a few) are showcases for Dime’s tight riffs. Truly a shining example of the power in simplicity.

Pantera dissolved at the end of 2001 amongst other factors, partly due to Phil Anselmo’s heroin addiction. This wouldn’t be the last we heard of The Abbott brothers. They went on to form a new band, ‘Damageplan’. With their bands first album release, “New Found Power” in 2004. Tragically, Dimebag’s life was cut short just seconds into a performance on December 8th, 2004 when he was shot and killed onstage. His legacy lives on, inspiring countless guitarists to this day.

Fun Fact: Pantera was a musical guest on an episode of Spongebob Squarepants titled “Prehybernation Week” in which an instrumental version of their song “Death Rattle” was used.